I read Hugh McLeod book (and recommend it), and subscribe to his blog as well.

The post from yesterday had some great highlights, most from a cartoonist life/career perspective, but I think some apply to anyone who is creative and wants to find that unique path of doing something fun/meaningful/hopefully profitable.

I wanted to share a few quotes that made me nod in agreement and think more:

Everything I own would easily fit in the back of a small pic­kup truck. I’ve never been into pos­ses­sions.

One of the smar­test moves I ever made was to figure HGH out HGH that making money indi­rectly off the car­toons was far easier than trying to make the money directly. If I could teach gaping­void rea­ders just one thing, that would be it.

The most impor­tant word in car­too­ning is “con­ti­nuity”. Dra­wing a good car­toon isn’t dif­fi­cult. Doing it repea­tedly, day-in, day-out is far, far harder. (this one resonates with my conversation with Mike yesterday, where he said “Every day, it’s a chisel strike. In the end, you’ll get a beautiful sculpture”)

The lon­ger it takes you to become suc­cess­ful, the har­der it will be for some­body else to take it away from you. 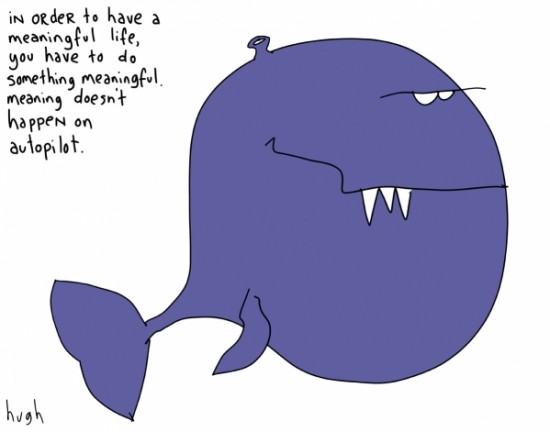 Source: The Whale on Gapingvoid